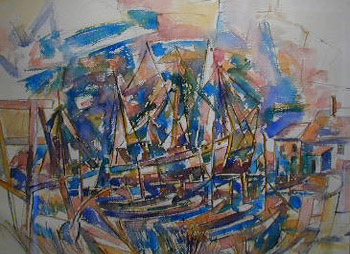 A native of Danville, Carson Davenport was an artist of national reputation and an artist-teacher of the first-rank. Born on February 14, 1908, he spent most of his life making art. Mr. Davenport attended the Danville Public Schools and Stratford College in Danville. He also studied at The Corcoran School in Washington, Grand Central School of Art in N. Y., The John Ringling School in Sarasota, Florida and The Eastport Summer Art Colony. His works have been exhibited widely. He is represented in numerous public and private collections throughout the country including the White House Collection, Knoedler Galleries of N. Y., the Virginia Museum and Valentine Museum in Richmond.

During the Depression he participated in the Public Works Art Project and his work attracted the attention of Mrs. Franklin D. Roosevelt. She chose his painting Pioneer Women to hang in the White House. In 1936, Davenport was commissioned to illustrate the industries of Virginia by The United States Treasury Department. He was commissioned by The United States Postal Service to paint murals in Chatham, Virginia and Greensboro, Georgia. In 1937, Davenport became the director of The WPA Art School and Gallery at Big Stone Gap, Virginia.

Carson Davenport was chair of the Averett College Art Department from 1943 until his retirement in 1969. He died on September 28, 1972.