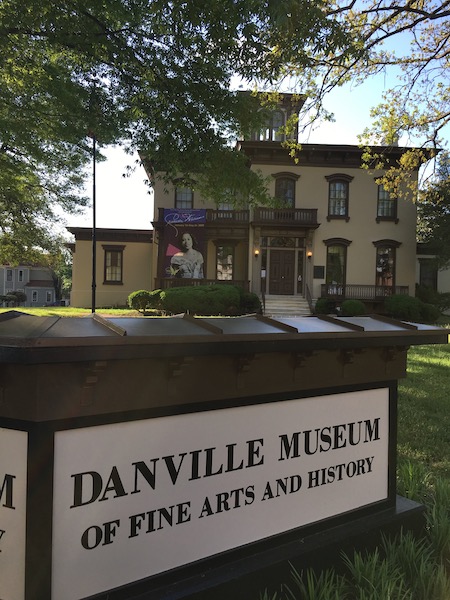 The Danville Museum of Fine Arts and History, established in 1974, is a non-profit educational organization whose mission is to promote art, history, and culture in the Dan River Region. Its Board of Directors’ vision is to be the Dan River Region’s leader for integrated awareness of history, culture, and community. Located on Main Street in the heart of Danville, Virginia with its beautiful Sutherlin Mansion and grounds, the Museum serves as a hub of learning and celebrations, connecting area colleges, medical campuses, schools, historic districts, and a thriving Downtown River District.

The Danville Museum campus includes the Sutherlin Mansion, Swanson Studios, a Research Center, the Perkinson Rose Garden, and park-like grounds. The Mansion includes the historic home, a grand auditorium, two art galleries, three collections galleries, a Civil Rights exhibition and a permanent Civil War exhibit. The Museum leases the property from the City of Danville. The site has been designated as a Virginia Historic Landmark and a Garden Club of Virginia Historic Restoration Project, and it is listed on the National Register of Historic Places. The Museum is a partner of the Virginia Museum of Fine Arts in Richmond and is a designated site of the Virginia Civil War Trails and Time Travelers programs.

At the top of Millionaires' Row, the Sutherlin Mansion was built in 1859 for a tobacco baron and industrialist, Major William T. Sutherlin. The house has become well known as the temporary residence (April 3 to 10, 1865) of Confederate President Jefferson Davis. In this house Davis authored his last official proclamation as president of the Confederacy, making the mansion popularly known as the "Last Capital of the Confederacy." After being sold to the City, the house was used for multiple purposes, including the Danville Public Library from 1928 to 1972. The library added wings to the main building in 1934 and 1950. A firehouse next to the Mansion was converted to art studios in the late 1970’s and is still a bustling ceramic studio with both ceramic and glass slumping capabilities. The studio is divided into two spaces – one is the ceramic studio area and the other is a painting and life drawing area.

Danville Museum of Fine Arts and History is the primary fine arts and historical institution in the region and is valued as a major cultural resource for regional educators, artists, students, and researchers. The Museum collaborates with cultural organizations to promote and develop art education and programs for the general public, both residents and visitors.   Partnering organizations include the Garden Club of Virginia local chapters, Danville Historical Society, Danville Science Center, the Danville Art League, the city and county school systems, the City Parks and Recreation Department, Danville Community College, and Averett University. The Museum space serves as a social and networking meeting center for local businesses, families, and organizations, including space to exhibit their artwork and collections.   The Museum offers a variety of membership opportunities and is open to the public with a small admission fee, which is waived for regional residents on one Saturday and Sunday each month and during special events.

An average of twelve exhibits change throughout the year in the five art galleries (Less in 2020 during the COVID-19 shut down). The Sutherlin Mansion features paintings and decorative arts from the Museum’s collection and on private loan. The Museum Gift Shop provides opportunity for local artists to exhibit and sell their work.  Multi-disciplinary education programs are offered year-long for all ages in the Swanson Studios, galleries, auditorium, and off-site in classrooms. Juried art shows, archives, collections, library, lectures, internships, and volunteer roles provide for continuing education and lifelong learning.

The geographic community surrounding the Museum is largely rural and underserved communities. The area has a rich agricultural history, mainly providing resources for the tobacco and textile mill industries.   In Pittsylvania County, the largest county in Virginia, the county population can be graphically represented as 76.20% White, 21.50% Black or African American, 0.30% Native American, 0.50% Asian, 0.37% from other races, and 1.40% from two or more races. 2.70% of the population are Hispanic or Latino, while the City of Danville is nearly evenly split. Over 80% of Museum paid membership is city residents, though museum and program attendance is not exclusive to members. 25% of city residents live below the poverty level, compared to 10% statewide.   The Danville Museum strives to include everyone in its curricula offerings by seeking grant and sponsor support for tuition to classes. Exhibits, classes, and programs are varied in scope and topic to provide something for everyone. The Board actively seeks Directors that reflect the area’s diversity and embraces and celebrates a wide range of perspectives and history.