Home ◼ Programs ◼ Interns at the Museum

Interns at the Museum 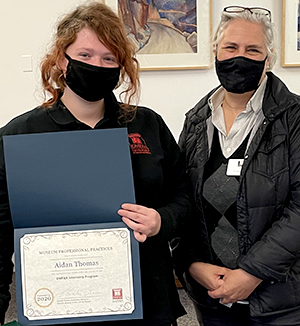 She is currently enrolled in a two-year Liberal Arts program with Social Science Specialization at Danville Community College (DCC) and will graduate in May 2021. She will be transferring to a four-year institute and will study anthropology and archaeology, with a specialization in Greek and Roman myths.

Aidan is working in the Collections Department at the Danville Museum. Through the internship program she has gained leadership skills, museum software competence, interpersonal skills and beneficial contacts. She enjoys the work environment at the Museum and feels that she has been put in positions of responsibility that have helped her learn skills that will propel her forward in the work field in the future.

In the future, she would like to work with National Geographic and the Smithsonian Institute to study the culture and mythology of Ancient Civilizations. Writing and traveling are also included in her plans.

Aidan's interests include: Art of all kinds, writing, reading, archery, SFX design, and spending time with her dog. 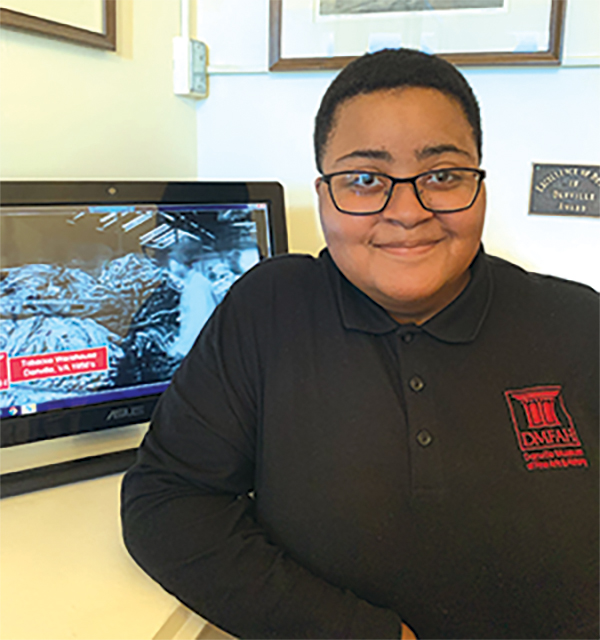 Adessa is a Senior at Danville Community College where she is an education major. She is a former president of the DCC Student Government Association (SGA). During her time on the student council she attended leadership conferences, participated in community service, and volunteered at God’s Storehouse helping to distribute food boxes to 300 families across Danville.

Adessa's choice classes are English and Math. She will be graduating with a certificate in Early Childhood Education and attending Averett in the fall of 2021. She is currently teaching at Abundant Life Childcare Center where she teaches three and four year olds.

Adessa joined the Internship Program at the Danville Museum in 2020, and completed the 300 hour Internship Program on November 5, 2020. She has been assisting the museum in updating the Camilla Williams Collection as well as the current traveling trunk narratives and activities. 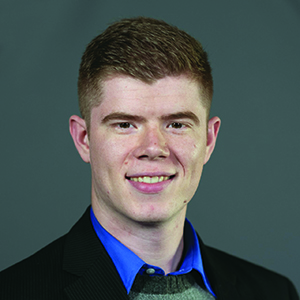 John was born in the UK (1994) to Earll and Lee Anne Sheridan, a Baptist minister and a stay-at-home mom. His family moved to the U.S. when he was 4, eventually ending up in Danville just before entered the 6th grade at Dan River Middle School.

Upon graduating from Dan River High, John joined the Air Force, first serving in Texas at Goodfellow AFB for 4 years, then in Nebraska at Offutt AFB for 2 years. Following his active-duty commitment, he transitioned to the Air Force Reserve and returned to Danville to attend Danville Community College, majoring in Network Administration. Deciding that accumulating volunteer hours was important for his career development, he joined the internship program at DMFAH in July of 2020.

For his future plans, John is deciding between getting an IT position close to home or moving on to a 4-year degree program after graduating from DCC. When he’s not volunteering or studying, John enjoys classical piano, outdoor sports, chess and culinary practices. 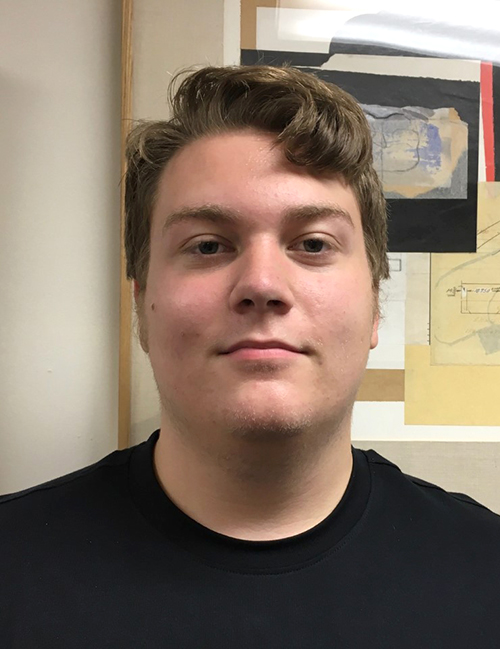 Tripp is currently in his senior year at Dan River High School. He started working with DMFAH in the Internship program on July 31, 2020. Helping to preserving the historical collection at DMFAH was important to Tripp, and while working at the Museum he has learned to catalog and organize some of the Museum's collections as well as learning to work with others as a team on projects. He enjoys working at the Museum and is thankful for the flexibility that the museum offers, allowing him to organize his school time around his internship work.

Tripp has applied to several colleges and has been accepted to Stoney Brook University in Stoney Brook, New York and will be majoring in history with teaching as his goal, and eventually becoming a professor teaching at college level. He hopes to study abroad and plans on minoring in either political science or philosophy.

When he's not busy with school or Interning at the Museum, Tripp enjoys collecting records, cassettes, older movies and reading. His favorite books are philosophy, novels, historical documents and biographies.